Report any bugs and Link not Found Contact Us Report!
Markets by TradingView
Home
Travel

Ruby Falls, the Highest and Deepest Underground Waterfall in the United States The

The waterfall is spectacular and mesmerizing to see its beauty, but have you ever had an underground waterfall? The United States certainly has many spectacular and stunning waterfalls because of its beauty, but have you ever seen a waterfall that is underground?
If not, you can visit the Ruby Falls Waterfall tour in the United States, which is open to the public. Exploring this waterfall will be one of the unique ways to explore caves in the United States.
Ruby Falls is located on Lookout Mountain near Chattanooga in Tennessee and is about 44 meters high. 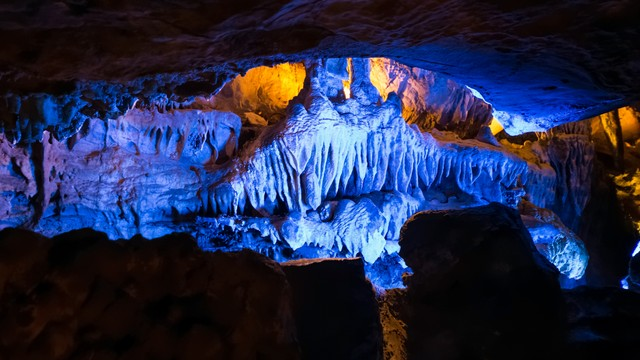 Apart from having tall waterfalls, Ruby Falls Cave has some of the most famous cave formations, including stalagmites, columns, stalactites, flowstones, and curtains.
As reported by The Travel, this waterfall is at the end of the main passage of Ruby Falls Cave in a large vertical shaft. The stream lies 1,120 feet underground and is fed daily by natural springs and rainwater.
An underground stream flows through Mount Lookout which is connected to the Tennessee River.
It was one of the first underground caves to be equipped with electric lighting decorations and has been open for public tourism since 1930. Now the cave is open to the public and operates daily.
The Steiner family privately owns Ruby Falls in Chattanooga, Tennessee. Ruby Falls Cave has no natural opening, and this cave was discovered when the artificial entrance to Lookout Mountain Cave was drilled in 1928.
In 1954, the trail around the basin was cut so that tourists could better enjoy the view of this magnificent waterfall.
"Travel deep into the historic Mount Lookout for beautiful views of the highest and deepest underground waterfall open to the public in the United States. Descend 260 feet in a windshield elevator to explore ancient formations along the cave trail to see the cascading falls," writes Ruby Falls's official website. What to Do When Taking a Tour to Ruby Falls, United States
Later, if there are tourists who take a tour of Ruby Falls, they will not only descend 260 feet by a glass elevator but they will be told how Ruby Falls can be found by accident.
The trip from me to Ruby Falls will take about 1 hour. Later after seeing the beauty of an underground waterfall, visitors can enjoy stunning views of the Tennessee Valley, the Cumberland Highlands, and the Tennessee River from the top of Lookout Mountain Tower.
The caves are open daily and are one of the most exciting family-friendly activities in the region. If someone is planning to visit, then it is wise to plan something else because tickets for this tour can sell out very quickly.
Tickets to enter this tour are of course very limited, and potential visitors must buy them online. Most visitors will spend a total of 2-3 hours at Ruby Falls and its various attractions.
For a special after-hours tour, the manager will suggest booking their Lantern Tour. On this tour, the caves and trails are dark and lit only by hand-held lanterns. This tour is offered on Friday evenings after business hours and is only for those aged 5 years and over.
The price of joining this tour is fairly pocket-friendly, for adults only need to spend 25 US dollars or the equivalent of Rp. 359 thousand. While children aged 3-11 years are charged 14 US dollars or equivalent to Rp. 201 thousand.
Getting Info...